In recent years, a new generation of PVD + PACVD (plasma-assisted CVD) coatings has gained widespread commercial success. As is well known, carbon can exist in three allotropic forms. Carbon, in a diamond crystal structure, is one of the hardest know materials. Carbon, in a graphite crystal structure, is very soft and lubricous. Carbon-based coatings, referred to as Diamond-like-Carbon (DLC) coatings, combine these two different properties of diamond and graphite - hence possess high hardness levels - in the range of conventional tribological PVD coatings (1500 - 3200 HV), coupled with a coefficient of friction which is 200-500% lower than that of conventional PVD coatings.

What is a Diamond-Like-Carbon (DLC) Coating? 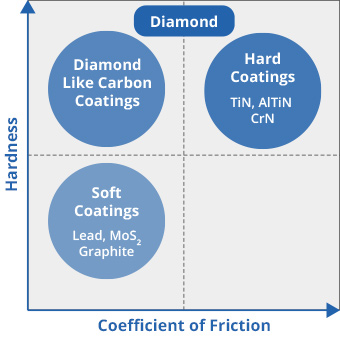 Besides this unique combination of properties, this new generation of coatings has high load-bearing capabilities, making them an ideal choice for improving the performance of engineered components. Moreover, these coatings are usually bio-compatible and hence suitable for food-contact and medical applications. The lubricious surface also has good release properties, making these coatings a good choice for plastic processing applications.

As shown below, DLC coatings can be deposited using a diverse range of technologies and alloyed with elements such as hydrogen and metals such as chromium. These constituent elements and deposition technique can have a significant impact on the properties and structure of the DLC coating. 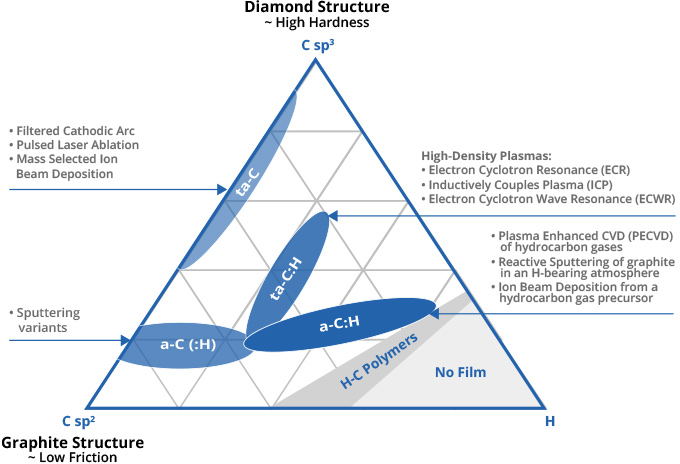 In order to meet the diverse operating conditions encountered by engineered components used for automotive and other generic industrial applications, HEF has developed a family of diamond-like-carbon DLC coatings. These coatings usually include several layers of different materials such as Cr, CrN, W, WC-C, Si with a top layer of amorphous carbon, with hydrogen. The selection of the under-layer is based upon several factors such as: adhesion requirements, wear mode and contact mode, friction regimes encountered during operation, load carrying capacity, and other metallurgical considerations. These coatings have a unique combination of high hardness and low friction coefficient, compared to conventional PVD coating (TiN, CrN, ALTiN etc) and soft coatings (such as solid lubricants like Molybdenum di-sulfide).

The properties of DLC coatings in terms of hardness; coefficient of friction; roughness; adhesion level; load carrying capacity; resistance to humidity influenced degradation; fatigue tolerance, etc. can be tailored over a wide range depending upon deposition parameters, deposition technology and the combination of materials constituting the coating. Some of the more common commercial variants of WCC and DLC coatings from HEF are shown below.

Other DLC coatings can be customized based upon the unique combination of wear mode, contact mode and the friction regime under which the component in operating.