In recent years there has been a concentrated drive to lower automotive carbon emissions and decrease fuel consumption. Both these factors can be significantly impacted by reducing friction between sliding and rotating surfaces of automotive components. The figure below indicates the energy dissipation in a vehicle and the contribution of friction losses to the total fuel energy. 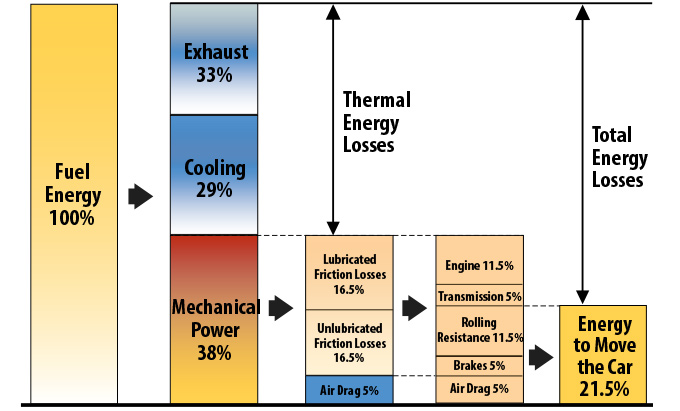 In addition to the demand for more fuel efficient and environmentally friendly cars - including electric vehicles - there has been an increasing focus on improving the reliability, durability and longevity of components - with the intent of providing longer powertrain and transmission warranties. This objective can be accomplished by improving the wear, scuffing, corrosion and fatigue resistance of components. These factors can be impacted by reducing friction losses and improving both the surface and bulk metallurgical properties of the component.

Fuel efficiency and component durability demands have been accompanied by trend of increasing engine power density - without increasing the weight and size of the engine. It has been possible to do this through both innovation in the mechanical design of components and interacting sub-systems; and minimizing friction losses between interacting components.

The diagram below illustrates the key role played by friction and wear reduction technologies, in improving the efficiency and durability of today's automotive systems. Friction and wear are largely surface phenomena and hence the choice of the appropriate surface engineering technologies that can minimize both friction and wear of mechanical components is crucial for meeting the current and future automotive performance standards.

In order to meet the diverse operating & tribological conditions (see Figure and Table below) encountered by mechanically complex engineered components used for automotive and other generic industrial applications, HEF has developed a family of diamond-like-carbon DLC coatings. The details of these coatings can be seen in the Section “DLC Coatings”

Wear Modes and Contact Modes of Some Automotive Components

Using this portfolio of niche DLC and WC-C based coatings, HEF has developed a series of successes with automotive components such as automotive tappets, piston pins and rings, rocker arms, differential gears, fuel system components, etc.